If you’re reading this, then more than likely you haven’t actually played on a playground in years, or possibly decades. But if you’re a parent, you’ve most certainly frequented these hot spots of outdoor entertainment for your kids. Even though (we hope) your focus remains on keeping little Billy from throwing sticks at the others as they climb the jungle gym, next time you drive by one, stop, preferably on the side of the road or in the parking lot, and take a look at the surface. Yeah, it’s mulch. Dirty, smelly, wooden mulch. You know, the kind that jabs you in the back when you land on it, and keeps you busy pulling splinters out of the hands of your children? Yea, that mulch. But you shouldn’t have to endure the pains of a well-mulched playground, especially since there’s a much, much better alternative: Rubber playground mulch.

If you’re reading this as a parent, suggest rubber mulch to your local parks and recreation department or school board, and if you’re a professional landscaper, do the same! Rubber mulch provides all of the solutions to the many problems associated with the old, traditional wooden stuff. There’s of course the durability factor; rubber mulch holds up against every kind of weather condition, and won’t freeze or get muddy (big, big plus if you’ve ever had to do a child’s laundry). It doesn’t blow away, and it even keeps the creepy crawlies out, which (most of) your kids will enjoy. Rubber mulch even comes in a variety of colors to match that of your school, and when it comes to cost effectiveness, think about this: Rubber mulch lasts for at least twelve years. Twelve! This saves money as opposed to having to replace the other stuff once every year. The rubber stuff also consists of over 98% recycled material, which means it counts towards those much wanted LEED credits, a fact which ought to raise a few eyebrows during the next school board meeting.

But even though all of the reasons listed above alone should turn you away from the relic that is wooden mulch, there is still an even better reason to switch to rubber mulch. Remember that jungle gym from earlier? Well, while kids tend to climb them, they also tend to fall from them, as well as other various playground equipment (I’m lookin’ at you, swing set). Based on surface depth of 6 inches, rubber mulch protects against falls from as high as twelve feet, which is five feet more than wooden mulch, and a full seven feet more than sand! That may sound incredible to you, and it should, because it is.

Ease of installation, reducing your community’s carbon footprint, saving money, and providing greater protection from injury are all excellent reasons in their own right to use rubber mulch. But that’s the best part about rubber mulch: You don’t have to compromise, it comes with it all. 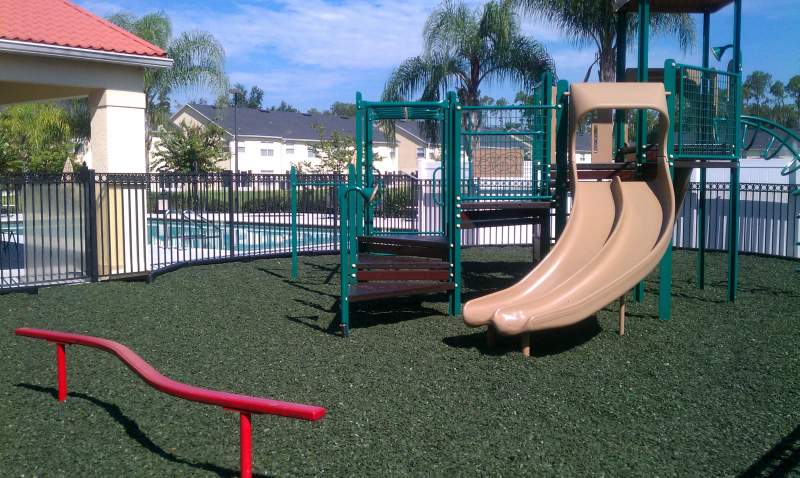 Is rubber mulch safe for dogs?